What is Regression Testing? Learn the Basics

Before new features and fixes are integrated into an application's main development branch, it goes through multiple tests. The final step is Regression testing, as it verifies the product behaviors as a whole, confirming that existing features haven't been adversely affected by recent program or code changes. It's responsible for the overall stability and functionality of the existing features as it validates the application and performs as expected after any code modifications, updates, or improvements. 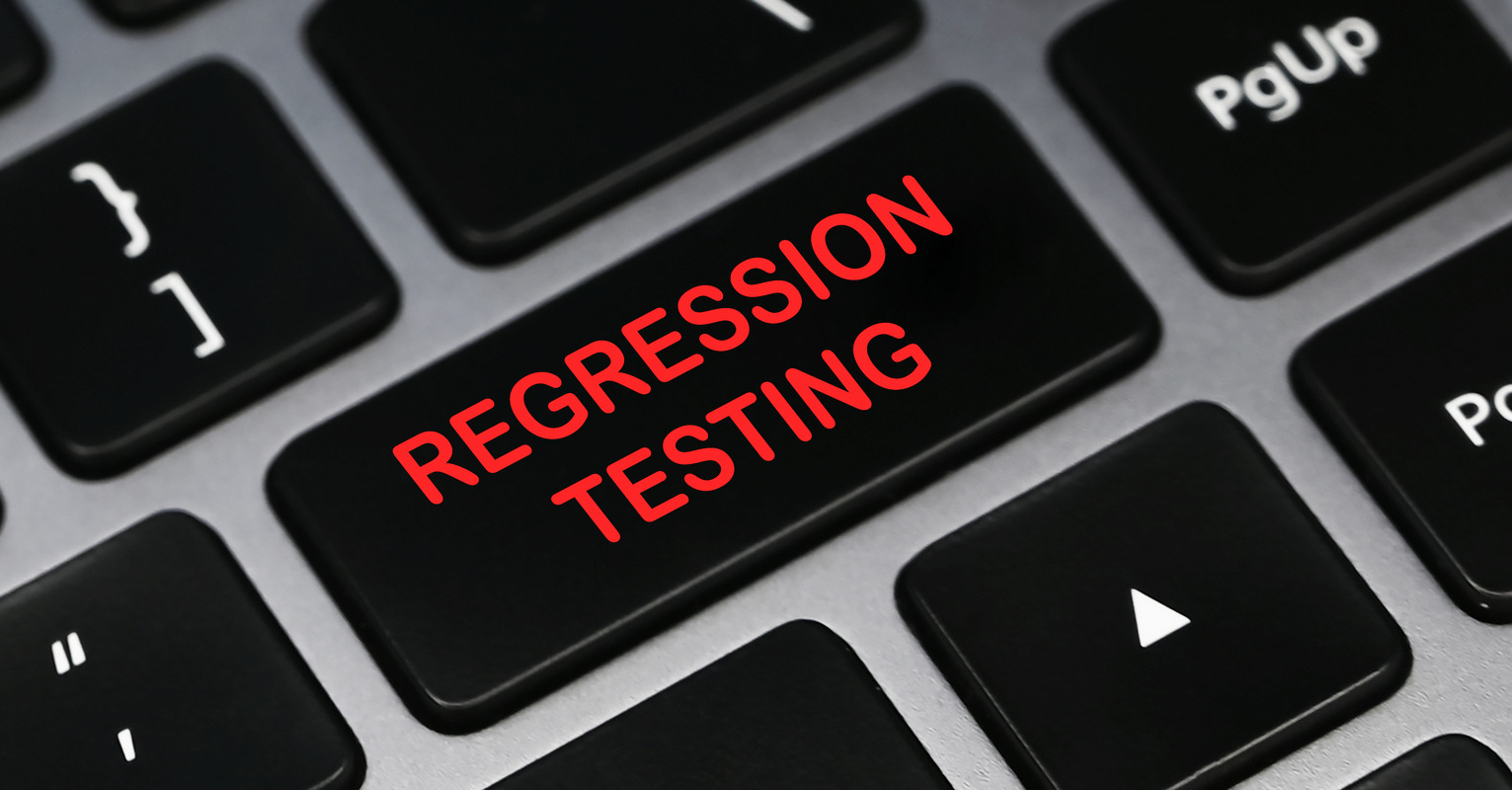 The system stays sustainable under continuous improvements whenever regression testing is applied after each new modification is added to the code.

Regression Tests can be performed on a new build when there is a significant change in the original functionality or even a single bug fix, aiming to mitigate the risks involving dependencies, defects, or malfunctions, so that the previously developed and tested code remains operational after new changes.

Regression Tests consist of a suite of test cases that are generally automated as they are required to be executed multiple times.

Running the same test cases manually and repeatedly is time-consuming and tedious.

Regression Testing is a testing method used to test the product for modifications or any updates, verifying that any change in a product does not affect the existing modules of the product and, as such, it's not dependent on any programming language.

Why is Regression Testing necessary?

Regression testing will be the process that ensures quality as the product is improved if your product undergoes frequent modification.

Sometimes a seemingly mild improvement might cause a cascading effect on the product's essential features.

Regression testing should be a part of the Release Cycle and must be considered in the test estimation. With an efficient regression testing process, product teams can detect new bugs early in the deployment cycle, receive more informative feedback, and respond instantly.

Hence, businesses save on costs and maintenance efforts to resolve the built-up defects.

Balancing between the numerous benefits and values of the Agile development approach (such as accelerated time-to-market, ROI, customer support, product improvements, and sprint development) and iterative testing to avoid conflicts as the product matures is a significant challenge.

Agile implementation of regression testing plays a crucial role in aligning the existing and updated functionalities, avoiding all possible rework in the future.

Regression testing helps developers focus their efforts on building new functionalities for the application and respond more quickly and efficiently to unexpected risks in software builds.

When to apply Regression Testing

Typically, regression testing is applied under these circumstances:

Regression checking is a type of retest conducted in this situation to ensure that said change has not impacted any part of the application that was working correctly before.

This is crucial every time something in the application or code has been modified or updated. It might be code, design, or anything that dictates the system's overall framework.

New versions of the code being created (increase in scope/requirement) or bugs being fixed are the most frequent reasons why this type of testing should be conducted, as there can be many dependencies or unexpected interactions between the newly added code and pre-existing functionality.

Regression Testing is a quality measure to check whether the new code complies with the previous code so that the unmodified parts of the application are not affected.

This test is essential in continuous development scenarios, as new functionality should not negatively affect the existing and previously tested features.

If this type of testing is overlooked, neglected, or skipped altogether, the product is vulnerable to critical issues in the production environment, leading customers and businesses into trouble.

Following are the primary testing problems for doing regression testing:

The different types of Regression Testing are:

Code is tested in isolation during Unit Testing, and any dependencies on the unit being tested are locked down so that it can be tested individually without any discrepancy.

Partial Regression Testing is the most common and cost-effective form of regression testing to verify that the code performs as it should even with new changes and that it is integrated with unchanged or previously deployed code.

When a change in the application is done on several modules or the impact of a modification in the performance of any other module is uncertain, a Complete Regression Test is carried out. Since the product as a whole is regressed to check for any changes in behavior, this testing is time-consuming and more expensive.

How Much Regression Is Required?

When the affected portion of code is large, or the scope of a new feature or bug fix involves multiple application modules, regression testing should be run on the whole application, executing the full suite of test cases.

Input from the development team regarding the size, scope, and functionalities affected by the new version is essential for the testing and QA teams to decide how thorough the regression test should be.

Automating these repetitive tests is crucial for the Regression to be efficiently executed on a new build. Regression test cases must be selected carefully to cover maximum functionality in a minimum set of test cases.

It becomes challenging when the application scope is vast, and there are continuous increments or patches to the system.

In such cases, selective tests must be executed to save testing costs and time.

These particular test cases are picked based on the enhancements done to the system and the parts where they can affect the most.

How To Regression Testing

The following techniques are used when doing Regression Testing:

Re-executing, the entire test case suite, is referred to in Regression Testing as a "Retest All" approach; however, this is very expensive as it requires enormous time and resources.

Test cases are prioritized accordingly depending on the frequency of use for specific functionalities and business impact. The resulting selection of test cases based on this priority will significantly reduce the regression test suite size and execution time.

Whenever a new version of the application is released, all the previously executed test cases are available for re-execution, and manually running this suite is time-consuming.

Automating these efforts is essential, as the team typically knows the expected results of the tests. Depending on the application size and the frequency of the changes in the application features and scope, a portion of these cases will remain reusable and should be updated over time.

For smaller teams, if the application characteristics change too frequently or the data for the test cases varies heavily, automation may be time-consuming and less effective.

Most Regression Testing tools allow the team to record the test cases by navigating through the application under test (commonly referred to as the "AUT") and recording all the actions end users perform in live production environments.

These actions are recorded in the test cases. They can then be played back during the Regression in testing and user acceptance environments to verify whether the application performs as intended.

Regression testing costs escalate when software changes too frequently, as manual selection, update, and execution of the test increases in time and costs. Automation of regression test cases is the smartest choice in such cases.

Following, these are the essential tools used for both functional and Regression testing in software engineering:

Subject7 is an efficient cloud-based, codeless regression test tool with exceptional capabilities for all types of web testing.

It is an excellent automated regression testing tool for desktop, mobile, and web apps. Because it allows desktop-based automation, Subject7 can perform desktop testing as well.

The website regression testing tool has a feature that records Regression's successes and failures. Also, it integrates swiftly with your existing development ecosystem with support for leading technologies like Jenkins, JIRA, GitHub, and other leading DevOps platforms.

Generally, a regression test can run regularly (daily, for example) or whenever a new code is checked in. Subject7 is accessible securely via public cloud, private cloud, and hybrid deployments and allows high-scale parallel processing.

The testing platform has extensible features for load, security, and accessibility testing, among other test automation use cases.

Subject7 is scalable and predictable, both technically and financially, because it offers simple, non-metered pricing.

The software regression test platform provides free plans with minimal features, whereas paid plans for individuals and businesses are available.

It is an open-source automated regression testing tool with a portable framework for administering tests on web browsers.

Created by Jason Huggins in 2004 while working on a web application, Selenium is an efficient and reliable collection of software for testing websites and not just a single tool.

The platform is also one of the best and most potent open-source browser-based testing tools.

It is a test automation tool having all the essential elements needed for efficient test automation. Testsigma offers fast test development using simple language, parallel testing, integrations, a fully-loaded test lab on the cloud, AI-driven maintenance, and whatnot!

Testsigma is a perfect automated regression tool that provides relevant test cases whenever the developer makes any program or software modifications.

Regression Testing is one of the crucial aspects as it helps to deliver a quality product by ensuring that any change in the code, whether small or large, does not affect the existing or old functionality.

Case studies for businesses in the banking domain indicate that Regression saves up to 60% time development teams spend fixing bugs caught by regression tests and 40% in costs.

An effective regression test strategy assures a quality product is delivered to the client and saves the organization time and money.

Regression testing is key to improving the overall quality of the product and user experience.

The proper regression testing tools can significantly identify and eliminate all surfaced defects early in the software development pipeline.

Out of the many automation tools that are available for automating the regression test cases, one should be selected according to the development team size and project requirements, and it needs to be able to update the test case suite to ensure obsolete cases are discarded, and reusable cases are appropriately maintained and updated.

Is your company looking to implement a successful and cost-efficient Regression Testing methodology using enterprise-class tools? Drop us a line here!