What is React Native? Why it’s so demanded?

The software development industry changed forever when in 2007, Apple announced the first iPhone and was closely followed the next year by Android, announcing their first device as well. Since then, application development has moved from desktop-only to mobile-first. Many companies even evolved to mobile-only for some of their products, with their websites being merely landing pages to download their apps. 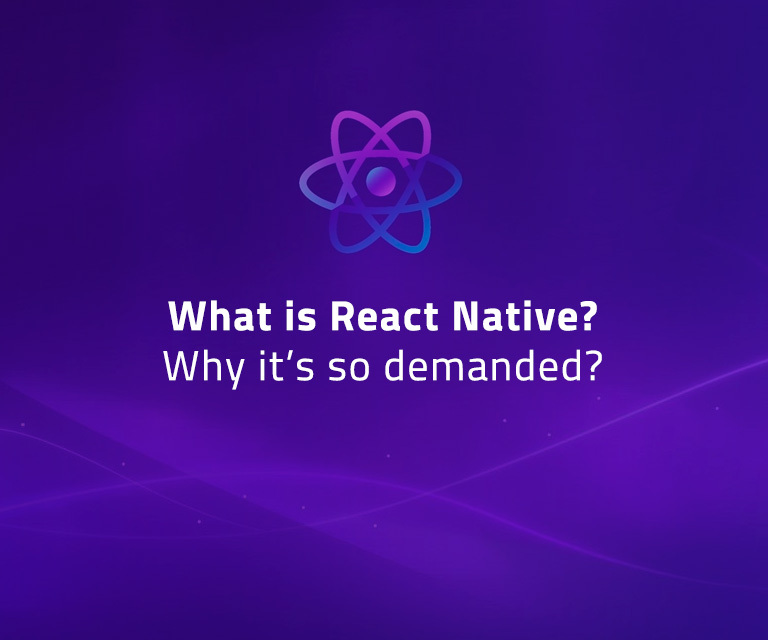 App developers worldwide need to reach the mobile market faster than ever. Traditionally, mobile app development was done natively: one codebase per mobile platform. The first attempts to make apps for different platforms from a single codebase consisted in just using HTML to make your website look like an app.

However, many libraries and frameworks have enabled Hybrid Apps development in recent years. With the Hybrid approach, developers can generate, export, or run (depending on the particular solution) mobile apps on different platforms from a single codebase.

React Native is one of the most popular and widely used hybrid development frameworks. Developers using React Native can maintain a single JavaScript codebase and run it on different mobile platforms. By leveraging the "bridge" API to native components, React Native does not run HTML in a WebView like many of its alternatives, but instead, it runs actual native components.

This article will look at hybrid app development with React Native.

What is React Native

React Native is a hybrid app development framework based on JavaScript. Developed by Facebook to improve their original clunky HTML5 mobile user experience, it is designed to run on multiple platforms like Android and iOS using the same codebase. It allows adding code implementation in native languages like Objective-C and Java for sophisticated scenarios. World-class apps like Instagram, Skype, and Facebook, use React Native.

React Native was initially built on ReactJS (also developed by Facebook). Despite being completely different solutions, they share many philosophical aspects and design principles (ReactJS generates HTML5, JavasScript, and CSS, intended to run a web browser).

Similar to what happens with ReactJS, React Native developers have faster development cycles. By hot-reloading, developers can see their changes in seconds instead of building and deploying a native app each time. The improvement in development cycle times is dramatic.

Mobile applications generally have a user interface and a logic backend that powers such an interface. The user interface consists of visual components such as buttons, input fields, drag-and-drop controls, and the like. Behind that interface lies a programmed logic that governs what happens when the user interacts with the visual components. Examples of such logic are data manipulation, API requests, and other processes triggered by a user's interaction with the mobile app UI.

Similarly to ReactJS, in React Native, the programmer uses JSX, a JavasScript/XML extension. When coding in JSX, a hybrid mobile developer can specify both markdown and JavaScript logic declaratively. React Native takes JSX as input, compiles it to JavasScript, and spawns several threads to communicate this code with the required native components. Many articles on the web incorrectly state that React Native is "compiled into native code". This is incorrect, and it would be a tremendously challenging task, given Objective-C and Java have different type inference models and other basic architectural differences. Instead of that, React Native relies on a native "bridge" for communicating back and forth between the JavasCript side of React components and the OS side of native UI components. This approach was born on a Facebook hackathon in 2013 and evolved to the current mature version of the framework. You can visit this site for a detailed view of React Native internals.

Regardless of the inner workings of React Native, the final result is that a development team can code an entire mobile app using JSX and share that same codebase to run it both on iOS and Android. Previous generation products like PhoneGap or Apache Cordova (both discontinued) allowed this but at the expense of an inferior HTML5-based UX running inside a web view. With React Native, you get both a shared codebase and a superior platform-native user experience. This is the strongest argument favoring React Native and why it is so popular and demanded nowadays.

Developers using React Native can render their code changes almost instantly in their development environment. This is a considerable improvement compared to the compile-redeploy-relaunch lifecycle of classic native development. The difference in consumed time is massive.

In addition, JavaScript (together with Python) is the most popular language worldwide. This translates to a more extensive open-source community when compared to native programming. Developers that are already proficient in ReactJS can train themselves in React Native. However, it is advisable to have (whether in-house or externally) native developers to reach out to in case there are platform-specific issues to address.

When to choose React Native

In general, React Native is a perfect match for companies that need to go multi-platform as fast as possible. React Native is an excellent choice for startups using the Lean approach to develop their MVPs (Minimum Viable Products).

React Native also lowers maintenance and delivery efforts, thanks to a more agile development lifecycle, apart from speed and cost benefits. When building a mobile app from scratch, it is good to look at already available React Native modules to minimize the future chance of needing to program native code.

If a company considers outsourcing its mobile app development needs, it should look for outsourcing partners with a proven track record on ReactJs and React Native projects. The learning curve for inexperienced development partners can be pretty steep.

Some things to look out for when considering React Native

It is essential to have an objective view of any new technology a team might be considering adopting. Despite React Native's many strengths, there are some common pitfalls any development should be aware of.

As with any new technology, React Native is in constant evolution. This could pose a challenge for teams and businesses that need a more stable and mature technology. In addition, it is possible that your particular app still needs the team to write some native code. There has to be a careful balance between RN and native code if this happens. Otherwise, the drawbacks could overcome the benefits.

Another point to consider is if your app has to deal with massive amounts of data, impacting the overall React Native approach performance.

React Native is an open-source hybrid mobile app development framework. Like its cousin ReactJS, it is also developed by Facebook.

Developers looking to build mobile apps with React Native will benefit from its near-native experience while leveraging a more agile development lifecycle. However, they also need to be proficient in JavaScript, JSX, and syntax similar to CSS to rip the framework's benefits.

This framework can help a business reach a wider audience, simultaneously deploying a mobile app in iOS and Android. If the development budget is tight, which is usually the case for startups and mid-size companies, React Native is an excellent choice for launching on both platforms without double the development cost.

Several well-known companies develop their hybrid mobile apps using React Native, including Facebook itself, Instagram, Pinterest, and Skype, among many others. The number of top companies using this technology is a good indicator of future-proofing.

It is worth mentioning that Android and iOS native development is still the better choice if having a 100% seamless UI is critical for the product. Video Games, streaming apps that need background control, apps making low-level use of underlying hardware are examples of scenarios in which going native might be the best choice. However, the vast majority of mobile apps don't usually fall into these categories. React Native is a great option to achieve an almost-native user experience, with the benefits of using familiar languages for web developers.

React Native poses an exciting opportunity for developers, businesses, and tech companies that traditionally wouldn't consider diving into native mobile app development. It is a great technology and improvement enabler without sacrificing user interface smoothness and overall user experience impact. It is a relatively new technology, so it is essential to clarify that it is a work in progress, but the benefits outweigh the risks. The tradeoff is that it's new and still a work in progress, although many teams consider this challenge empowering and arrive at outstanding results.

Our team has vast experience in both ReactJS and React Native. Contact us here.