NodeJS vs. Python for my Backend: Which is the best?

In the last decade, both Node.js and Python have gained market popularity due to their wide range of features and functionalities. Both technologies currently lead the ranking for backend development. However, when it comes to web development, choosing between Node.js and Python can be challenging, as both have pros and cons. 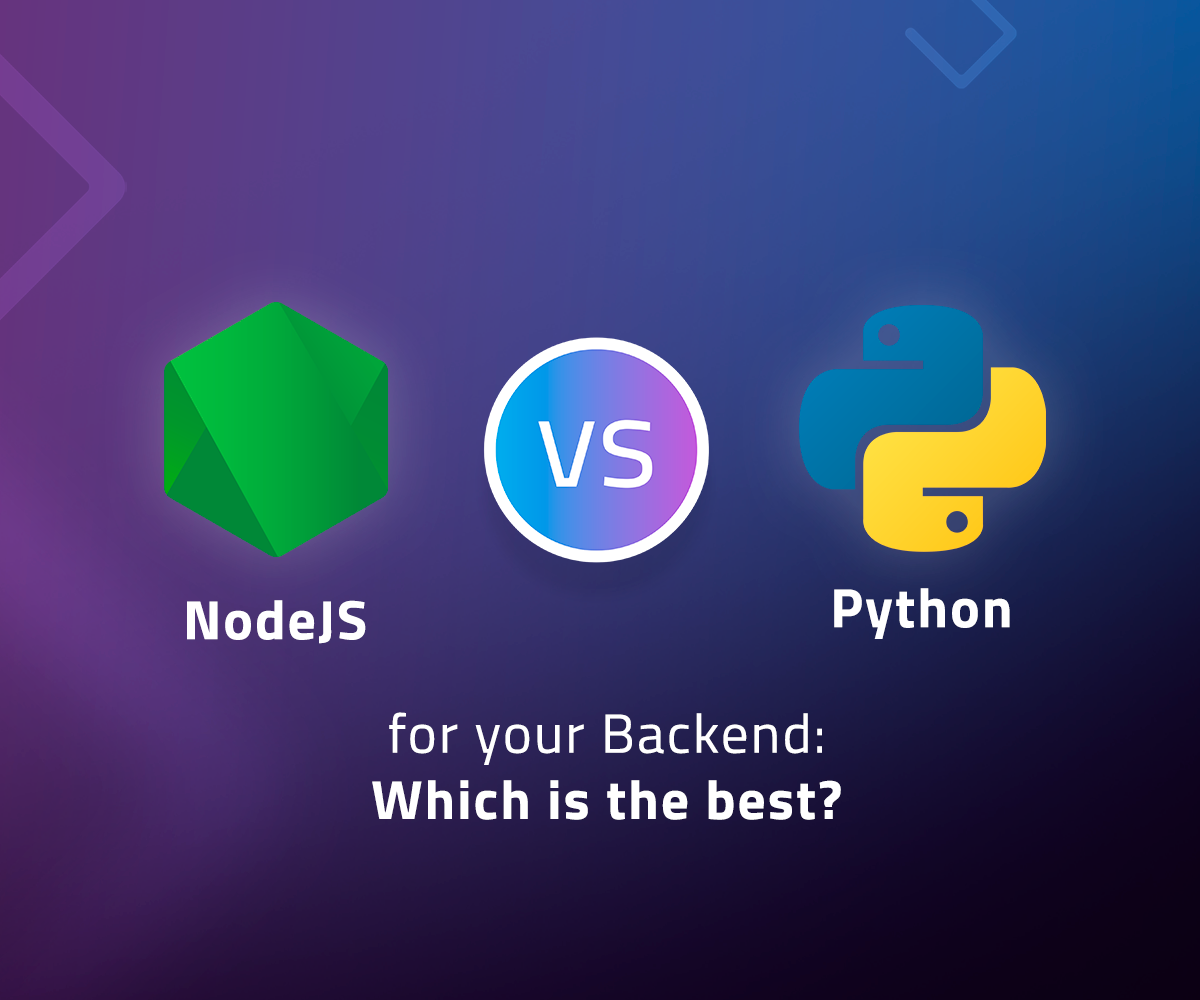 Which of them is better, and what are their differences? This is the most common question that many entrepreneurs ask themselves when deciding which language to adopt for their next web development project.

Remember that every project has its requirements and brings its specifications and demands. Therefore, selecting the right programming language to code is crucial.

In this article, we will look at the differences between Node.js and Python to help you decide which of these technologies is more suitable for your goals.

First, we will begin with a brief description of both:

It is written in C, C++, and JavaScript and is used to create high-performance and complex web applications such as instant messaging apps, real-time channels, and multiplayer games.

Python is a programming language that can run on any machine, it is object-oriented and features built-in dynamic semantics, and is used mainly for web and software development.

Python is an interpreted language, so compilation is not necessary to run applications written in Python, as they are executed directly by its interpreter.

Let’s get a glimpse of their architectures:

In short, multiple clients submit requests, and the server processes each of them before returning the response.

Python works differently. It does not convert its code to machine code directly. Instead, it compiles the code into bytecode, which is then converted into machine code by an interpreter.

Additionally, Python does not support multithreading, and it is based on an older framework, using synchronous programming.

Here is a useful comparison between Node.js and Python:

Benefits and disadvantages of Node.js and Python

● It has an amazing execution speed. Additionally, code in execution—composed by specialists when creating the program—forms quicker. Designers only need to focus on composing legitimate existing code packages, which then leverage the speed of the system.

● This platform includes NPM, the Node Package Manager, which allows creating web solutions quickly and easily. Developers can share, update or reuse code with the help of this built-in package manager.

● Node.js features a soft data stream. If you want to access a specific file while loading it, Node.js will allow you to do so. This feature extremely benefits developers working with real-time audio or video encoding.

● Node.js has an unstable API, meaning that compatibility tends to break between versions. Changes must be made to your applications to keep everything working when upgrading to a new version of Node.js.

● Because of its asynchronous, event-driven nature, it does not have the same computational power as other languages, such as Java.

● It is not suitable for CPU-intensive applications.

● It is a great option for software development, as developers can use great frameworks such as Django and Flask.

● The Python standard library is very extensive and includes a large collection of libraries and frameworks.

● Python is compatible with all operating systems (macOS, Linux, UNIX, and Windows.) Programmers only need to write code once, which can run everywhere.

● It is open source. Everyone can use and distribute it freely.

● Slowness, mainly due to its dynamic nature and versatility.

● Large memory requirements, mainly due to its data type flexibility.

● Not suitable for mobile app development.

In conclusion, Python and Node.js are two very powerful options for developing web and back-end applications, so there is no direct winner.

Their suitability depends on the problem you are trying to solve.

Node.js can be used for real-time, client- and server-side web development, and Python is best suited for developing scientific and big data solutions.