In the mobile applications world, not all apps are created in the same way or with the same tools. Native, web, and hybrid apps are different in many ways. Let's discover their differences and how each one can move your business forward. 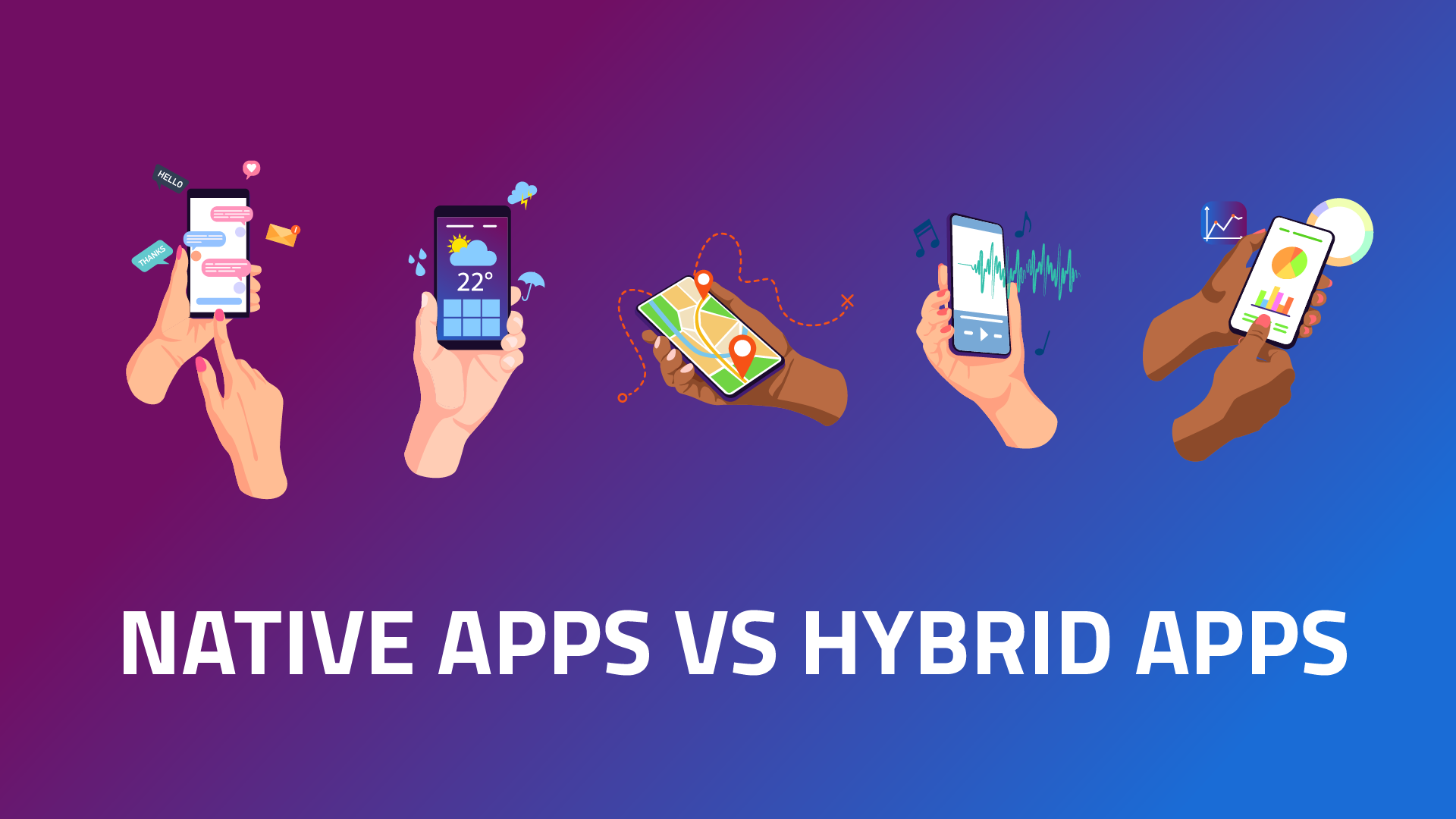 Choosing the correct type of mobile application to develop for your businesses can be complicated. Web app, hybrid app, or native app, which is better? The answer is somewhat relative because it honestly depends on your company's objectives and overall product goals.

Some questions to consider before choosing one approach may include:

But asking these questions won't do you much good if you don't know the difference between each type of mobile app and why those differences matter. Let's dig in.

A native app is a mobile application developed specifically for a mobile operating system, either Android or iOS.

The app is designed following the technical and user experience guidelines of that particular OS, so it has the advantage of faster performance and a similar look and feel to most of the other native apps on the device. The end-user is thus more likely to learn how to navigate and use the app faster.

Native applications have the significant advantage of quickly accessing and utilizing the built-in capabilities of the user's device, like the address book, GPS, or camera.

In short, native apps are native to the user's OS and hence built per those guidelines.

Hybrid apps are websites merged into a native wrapper, and they rely on cross-platform functioning.

Those apps look and feel native to your iOS but are outside of the basic frame of the application, usually restricted to the controls/navigational elements, and a company's website fuels them.

Then, a hybrid app is a web app built using HTML5 and JavaScript, wrapped in a native vessel that loads most of the information on the page.

While native apps are built on programming languages supported only by a specific platform, hybrid apps are created with one core code covering both platforms. So the main difference between native and hybrid is the development process.

How about we consider some of their main differences when comparing them in critical areas like cost and time-related issues:

When a company needs to build a mobile app, they either play catch-up with their business competition or have identified a market opportunity previously untapped.

Whatever the reason is, executives want the application built out and released ASAP.

‍
But "as soon as possible" often means many settlements need to be made, making decisions on the fly about features and must-have/nice-to-have add-ons. Both hybrid and native apps can get the job done, but we must first understand specific considerations.

First, if your company can wait six to nine months before the app is launched, a native approach makes the most sense. Native applications reportedly have the best performance, highest security, and best user experience.

‍
However, suppose the desired time to market is less than six months. In that case, a hybrid app could be a better alternative. It can be built in one source code, released across platforms, and has considerably less development time and effort than native applications.

Your users will expect it to be intuitive and responsive in terms of speed, whichever approach you've decided to take.

‍
Getting to market fast may guarantee a mobile presence, but it certainly doesn't assure the success of the mobile app. Mobile app usage has taken over traditional browsing paths. Companies with a mobile presence must constantly think about their application's two key promoters or detractors: speed and user experience.

‍
Overall, the app's performance and the user experience vary significantly based on the development framework chosen, but that choice will depend on the time you have in your hands to give birth to the project.

Native apps are built with platform-specific programming languages, which allow developers to optimize the system and get maximum performance. Hybrid apps add an extra layer between the platform and the source code, which inevitably results in at least some performance loss.

‍
But many types of apps don't need many optimizations to run fast on almost all mobile devices, and those apps can benefit from the hybrid approach the most. Still, native apps win when it comes to performance, which is why you don't see too many hybrid games.

There are the most popular frameworks for Hybrid app development:

As for the most popular frameworks for Native application development, we can found the following for each operative system:

Why One or the Other?

We have a pretty clear understanding of hybrid apps, native apps, web apps and their differences.

A native app is probably the best choice for businesses with a large budget as they promise high performance and a consistent user experience.

But suppose you're a startup or a small business with a smaller budget. In that case, a web application will be the most affordable option for you.

If your business is somewhere in the middle, a hybrid app will meet your needs.

Regardless of whichever direction you choose to go in, your business should aim to deliver the best user experience possible. Otherwise, all the time and money you devote to building the app will go to waste simply because your users won't enjoy using it.

Considering all pros and cons, an expert team, an outsourcing partner, or your developer can suggest the right approach to meet your requirements. The differences between native and hybrid apps have revealed more opportunities for companies to provide their users with the best experiences. The secret is to choose and execute them well.

Ready to build your web, hybrid, or native mobile app?
We can advise you free of charge, just drop us a line!