Myths of the Artificial Intelligence (IA)

In a previous article, we saw an introduction to artificial intelligence, its concept, origin, and applications. We discussed that most of our daily activities are currently executed and facilitated by AI, from Google searches to customer service bots and medical breakthroughs that improve the quality of life of hundreds of people worldwide. 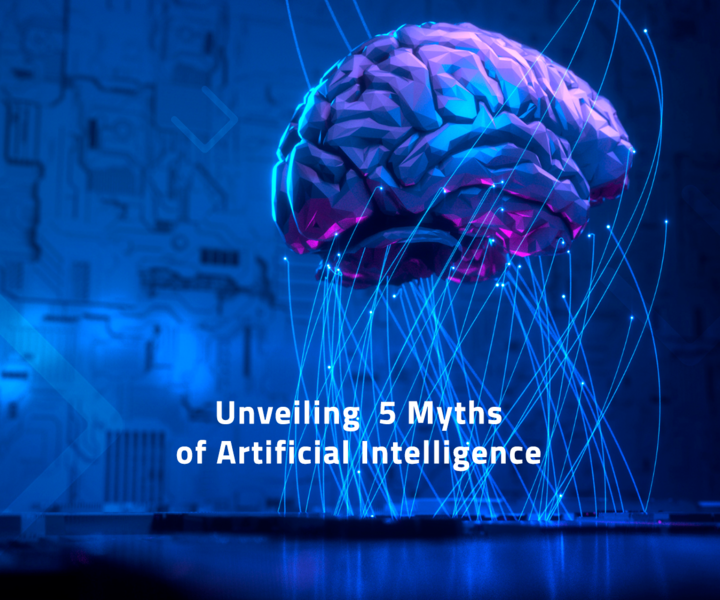 However, despite its benefits, there are still many myths, doubts, and mistrust around AI. A large percentage of the population believes that artificial intelligence will dominate us and destroy countless jobs in the future.

Is this really the case? Is there any objective justification for these fears?

Come with me to find out! Let's look at the most common myths and facts about AI.

Myth 1 - Machines will replace humans in the workplace.

This is one of the most controversial myths about AI. It is based on the notion of competition between human employees and machines.

One obvious answer to this question is that companies worldwide are constantly looking for ways to reduce their employees’ workload. However, this reduction is not meant to replace them, as is often mistakenly believed. Technology does not replace human capabilities but complements them to evolve. In the same way, AI will not be able to replace human jobs. Instead, it will transform existing jobs and create new ones. It will augment the way people complete their work by extracting and analyzing data to aid in real-time decision-making.

In a practical sense, this combination is more of an alliance between humans and artificial intelligence than a competition, so believing this myth of human replacement is a mistake. Artificial intelligence will not take away your job; it will only change how you work and what you do at your job.

The idea of creating machines that are more intelligent than men and women is controversial. People such as Stephen Hawking and Nick Bilton believe that AI could slip out of human control in the future. This, coupled with science fiction movies depicting a robotic apocalypse, has caused many to “panic” about this AI technology.

Although efficiency and precision are strengths of AI, it remains a self-evident fact that AI can never reach human levels of intuition and emotion. Therefore machines in no way constitute an existential threat to humanity.

The autonomy of machines is purely technical, in that AI only applies to material chains of causality, ranging from information-seeking to decision-making.

Devices have no moral autonomy; they have no will of their own and remain at the service of the goals we set for them.

Although Artificial Intelligence currently influences decision-making processes in business, astronomy, medicine, and pharmacy, the fact remains that no machine can think for itself, no matter how well we can “train” it. This is important: in the end, machine learning depends on the training it is given.

This limitation of AI will take many, many years to overcome. More than a few experts in the matter believe this barrier will never be overcome. As such, most processes that use AI will always rely on a final verdict from people to make decisions.

In practical terms, the notion that AI has the potential to create superhumans or dominate the world is currently unthinkable.

AI can indeed be as “intelligent” as we program it to be, becoming proficient at what we want it to do. However, there is no artificial intelligence without humans. AI cannot turn itself on, motivate itself, decide on its own, or ask alternative questions.

Myth 4 - Data and AI technologies are challenging to adopt because they are incredibly complex.

The existing supply of options for implementing cloud-based systems is effortless and cost-effective for any organization to implement data and AI technologies.

Reasonable investment and training of a few employees to get the most out of the data are enough to implement a robust data feedback structure.

Of course, you need a logical mindset, good data analytics, and strategic capability, but you certainly won't need a Ph.D. in either of these fields.

Today, artificial intelligence is facilitated in all kinds of environments. Some technologies are designed for specific tasks, such as catching fraudsters using biometric behavioral data.

While we are not yet at the point-and-click level of implementing an artificial intelligence system, these tools are already accessible to anyone willing to learn, and many are open source. Even small businesses with limited scope, environments, and scale can benefit from the lessons provided by artificial intelligence.

For example, AI can automate and improve customer service orders or extract patterns from when and why competitors change their prices or product offerings.

Even though artificial intelligence is still growing, it is here to stay.

The perspective of many who see AI as a threat instead of a solution is a consequence of the significant lack of knowledge about it.

Indeed, after reading about these myths —now refuted—you will be better positioned to understand the truth behind AI and bet on it!