While tools and techniques used for software testing may differ from one project to another, testing has always played a vital role in any software development methodology. In modern approaches, software testing has become an integral part of software programming so developers can find and correct errors in each iteration, which saves teams from facing costly fixes further down the road. Software testing plays a significant role in determining a software product's success. 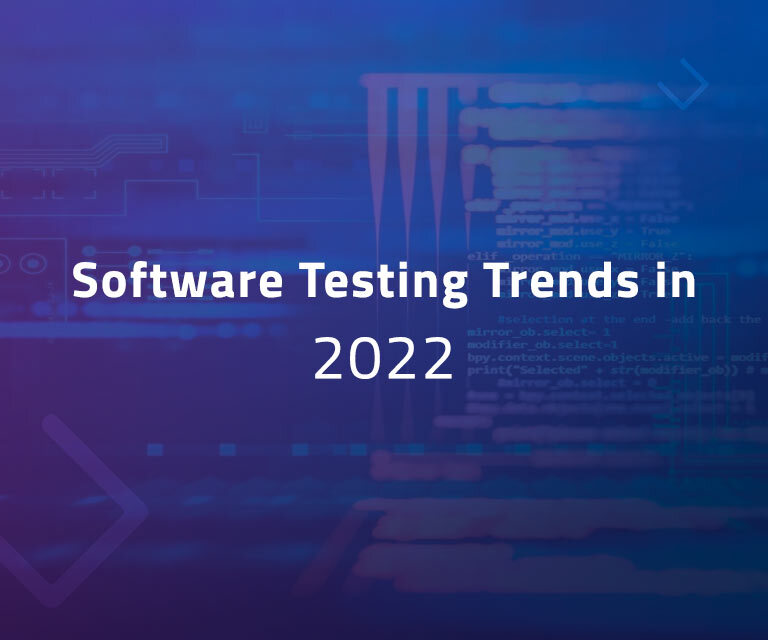 In the last few years, the state of the art of Software Testing and Quality Assurance has significantly evolved.

Cloud computing, Big Data, emerging technologies such as Blockchain, and the pressing need to focus on cybersecurity, have impacted considerably how Software Testing will be planned and executed in 2022.

This article will focus on six trends that will shape how Software Testing will look in the upcoming year.

Artificial Intelligence (AI) and Machine learning (ML) are among the leading change agents of the future. Applying AI and ML techniques to software testing is not new.

Still, recent developments in these areas, together with the vast amount of data available in the cloud (enabling Big Data testing solutions), present a unique scenario for AI and ML software testing approaches in 2022.

By using Machine Learning techniques, software development teams can also have AI systems to look for specific code checks in the development phase.

These tools can perform anti-patterns detection and best-practices suggestions based on trained models.

ML-based tools can perform Log and Defect analytics to identity checks that should be done automatically and rank and evaluate regression tests unattended.

Notably, when using AI or ML testing approaches, the prediction of critical test configurations can be based on previous checks.

In 2022, companies will increase their use of AI and ML in software testing, from user interface visual testing to self-healing mechanisms for cloud-based platforms.

Internet of Things (IoT) devices are usually small hardware devices that are digitally interconnected and streamline data flows over the network.

According to this Gartner forecast, active IoT devices will reach 21.5 billion units by 2025. With this expansion rate, software testing teams will focus on functional tests and IoT devices' firmware performance and security.

Test automation has been around for quite a few years. However, as more companies adopt DevOps and Agile practices, testing automation becomes essential.

Automation plays a vital role in Agile practices, Continuous Integration & Delivery, and DevOps. As this trend progresses, the need for teams to automate their testing processes will significantly grow.

A robust approach in this area is Scriptless Test Automation.

With scriptless or codeless testing automation, testing teams can build and maintain automated tests without having strong coding skills.

Scriptless testing tools are usually user-friendly and help reduce the time and effort spent on maintenance. They can also help fill some skill gaps between developers and testing teams.

In the Agile approach, testing is no longer a phase done after development. Agile Software Testing happens in each iteration, alongside Software Development.

Moreover, as the Microservices architecture pattern continues to be widely implemented, Software Testers are often distributed across different development teams instead of being grouped in a Testing or QA department.

This pattern calls for testing teams to significantly improve their communication and collaboration skills and adaptability to constant change.

As DevOps is a combination of software development (Dev) and IT Operations (Ops), the term QAOps refers to the same phenomenon for Quality Assurance (QA) specialists.

QAOps combines QA with the main ideas of DevOps, which are Continuous Integration (CI), and Continuous Delivery (CD). With this approach, Continuous Testing (CT) happens in the same software development pipeline.

The QAOps practice implies three development pipeline actions: Trigger, Execute, and Report. Tests are built on the trigger phase, parallelly run on the execution phase, and a briefing of execution is produced on the report phase.

QAOps enables another Agile-fueled testing trend: Shift-left QA ("left" meaning "earlier" by convention when project phases are visualized in a workflow). In the "Shift Left" approach, teams strive to conduct tests as early as possible in the development pipeline.

With Shift-left, software development teams focus on collaboration and proactivity to ensure the feasibility of requirements upfront. This approach allows the Testing team to work side-by-side with Developers and Product Owners right from the beginning of a project.

The key to "shifting left" is to measure the effectiveness and correctness as soon as possible. The idea behind shifting left is simple: testing in the early stages helps save time and money.

As it happened with DevOps, QAOps and the Shift-left approach are exciting trends to look for in 2022.

These architectural patterns require QA and Testing Teams to test API and services independently from the clients consuming them.

Given the increasing number of APIs used in distributed software, there is a pressing need for automated API testing.

One of the most popular tools for API testing is Postman. With tools like Postman, teams can automate different API tests, including unit, functional, and integration tests.

By adopting automated API tests, companies can save money on QA and lower communication lag between QAs and Developers.

Last but not least, in 2022, the industry will see an increase in what could be called non-traditional testing. Testing teams will have to up their game in testing non-functional attributes of software products such as Performance, Scalability, and Security.

In particular, the growth Blockchain and other distributed ledger technologies have experienced in 2020 and 2021 will continue to speed up in 2022 exponentially.

Blockchain is considered one of the most advanced emerging technologies currently in the market. This technology has a strong probability of dramatically impacting distributed data, cryptography, and even currencies in the near future.

As more companies begin to develop blockchain-based software products, testing teams will have to add tools and practices to help development teams verify the correctness of their work.

As with any emerging technology, there are new risks to mitigate. Data security issues call for new effective distributed ledger testing strategies. This is an unsolved challenge that testing teams will face in 2022.

Security testing has become a pressing issue for organizations worldwide. Having employees, contractors, and partners with the right security expertise is critical to any organizations' well-being.

Testing teams increasingly have to deal with confidentiality, authentication & authorization, integrity, and other security requirements. There will be an increased demand for these testing skills in the following years.

This article has covered six software testing trends that will significantly impact companies worldwide in 2022. To summarize:

As the year 2022 unfolds, these and other trends will press on software development and testing teams to improve their skills to help companies protect their value propositions and meet the increasing demands for excellent quality software products.

Does your company need to update its QA and Testing practices? Let’s talk!